RAC team members Helen Grogan (shown in photo below in control room) and Mark Packard recently toured the Hanford Site B Reactor National Historic Landmark while visiting the site for a project meeting. 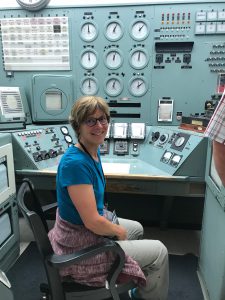 RAC team’s Helen Grogan (in photo) and Mark Packard take a break from project work with a tour of the Hanford Site, B Reactor National Historic Landmark.

As part of the Manhattan Project National Historical Park, and in partnership with the National Park Service, the Department of Energy has offered free public tours of the B Reactor since 2009.

In the photo at top of the Hanford Site B Area from World War II, B Reactor can be seen between the water towers on the right side of the photo, along with other facilities that supported reactor operations. The B Reactor was the world’s first full-scale plutonium production reactor. Operations began in September 1944; the reactor was shut down from 1946-1948, and then went back into service until 1968.