RAC has an independent contractor agreement with Waste Control Specialists (WCS), a leading provider of treatment, storage, and disposal services for low-level radioactive waste, mixed low-level radioactive waste, and hazardous waste, to implement the RACER data management and analysis application and support and enhance WCS’s environmental monitoring and compliance program. The RACER data management and analysis application provides both a repository for WCS’s environmental monitoring and related data and the RACER Data Analysis Tool (DAT) to facilitate the analysis of these data and communication of the results. The RACER for WCS application incorporates environmental data collected since the facility began operations as well as pre-operational environmental data. Routine data have been updated directly from Electronic Data Deliverables (EDDs) since 2012. RAC has also developed several enhancements to the RACER application at the request of WCS to support analysis and compliance reporting.

Technical support has included the development of a white paper describing an alternative approach using dose to the public for demonstrating compliance at the low-level radioactive disposal facility, the development of concentration-based effluent discharge limits for the low-level radioactive disposal facility discharge evaporation ponds, and the analysis of the most likely sources of tritium and potential migration pathways to support the analysis of detections of tritium reported in the commercial waste facility contact water tanks. RAC also developed a discussion and illustration of the application of the screening and compliance evaluation process that was outlined in the white paper. 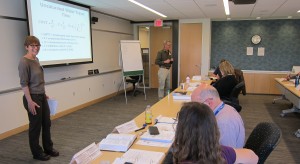 RAC is currently contracted to present up to five one-week training courses on risk assessment for the U.S. Nuclear Regulatory Commission (NRC) through 2019. RAC presented the most recent of these courses to NRC staff from May 8 through 12, 2017, at the NRC Professional Development Center in Rockville, Maryland. The first training course under this contract was presented to NRC staff from April 27 through May 1, 2015, at the same location. RAC had previously presented a similar training course to NRC staff in 2009, under a separate contract. RAC’s lectures, discussions, and demonstrations for these courses are designed to allow participants to use the acquired knowledge for performance evaluations of licensee environmental assessments and to perform environmental impact reviews, inspect licensee programs, and manage environmental projects. The scope of material includes techniques used for conducting source term modeling for air, soil, groundwater, and surface water releases; exposure pathways, including direct radiation, ingestion, inhalation, and submersion from releases of radioactive materials to the environment; methodologies used in conducting transport modeling, including a performance assessment framework; techniques used to conduct parametric sensitivity and uncertainty analyses; dose conversion factors; and development of sampling and analytical methodologies used for confirmatory analysis.

Analysis of Release from Single-Shell Tank at Hanford

RAC was tasked with carrying out an independent evaluation of the fate and transport of releases of hazardous chemicals and radioactive materials from Hanford’s single-shell tank system and the subsequent environmental and health risks associated with past and potential future releases. The project sought to address concerns of the Washington Office of the Attorney General and the Washington Department of Ecology over delays on the part of the U.S. Department of Energy in the remediation schedule that increased the likelihood of additional releases and associated risks to the environment and human health. It was anticipated that RAC’s work product would be used to provide technical support for ongoing litigation that sought to accelerate the rate of cleanup of the single-shell tanks.

The scope of work consisted of tasks leading up to the potential preparation of an expert report and the provision of expert testimony at discovery depositions and before the court. These tasks included a review of project documents, the characterization of contaminant source terms, flow and transport modeling in both the vadose zone and aquifer, and assessment of the projected risks. RAC published a technical report and also provided training to Department of Ecology personnel on groundwater transport modeling and dose assessment.

The independent modeling conducted by RAC included source term screening and unsaturated and saturated flow and transport modeling. Iodine-129 and Cr were identified as key radionuclides and chemicals. Concentrations of I-129 and chromium in the aquifer where it discharges to the Columbia River were well below regulatory limits of 1 pCi L–1 and 48 μg–1, respectively. Near the source, I-129 and Cr concentrations would likely exceed the regulatory limit.

RAC was contracted by U.S. Department of Energy to investigate the default deposition velocity used in the MELCOR Accident Consequence Code System (MACCS) as applied to a safety analysis of the Waste Treatment and Immobilization Plant at the Hanford Reservation. As part of this investigation, RAC compared the MACCS atmospheric transport model (a Gaussian Plume Model) with Lagrangian puff atmospheric transport models that are capable of assessing transient releases in a spatially variable meteorological wind field. RAC was invited to present their findings to the Defense Nuclear Facilities Safety Board.

RAC was asked by the Department of Justice to perform a series of technical audits of Los Alamos National Laboratory for compliance with the Clean Air Act, 40 CFR 61, subpart H. The project was initiated by a lawsuit filed by Concerned Citizens for Nuclear Safety (CCNS) against the U.S. Department of Energy and the former director of Los Alamos National Laboratory. Settlement of the suit required that the audits be performed by an organization agreed to by all parties, and RAC was chosen as the independent auditor.

The first audit began in 1997 and evaluated compliance for the year 1996. Most significantly, RAC determined that LANL did not meet certain regulatory and technical requirements and was not in compliance with 40 CFR 61, subpart H, for 1996. However, it was considered unlikely that the Laboratory exceeded the 10 millirem per year dose standard prescribed in the regulation.

A second audit was conducted in 2000, and it was concluded that LANL was in compliance with 40 CFR 61, subpart H for the year 1999. Most notably, the audit team commended the Laboratory for addressing the findings of the first audit and for the concerted effort that was put forth during the audit to make it an open, thorough, and responsive process. Credit for this achievement was also due to CCNS, who, as a citizens’ organization, helped initiate the audit and design its format.

A third audit was conducted in 2002 when it was concluded that LANL was in compliance with 40 CFR 61, subpart H for the year 2001. RAC’s audit team noted that LANL made significant changes to improve the compliance program over the period of the audits, many in response to recommendations made within the audit reports. This was the third audit of its kind, and the audit team concluded there were no substantive deficiencies requiring corrective actions that justified a fourth audit under the Consent Decree. Therefore, RAC considered that all audit requirements under the Consent Decree were met and that the process was completed.

The flexibility of RACER allows environmental data collected at the Pueblo, and stored in the San Ildefonso database, to be evaluated by the RACER Risk Calculation Tool that is tailored to the specific pathways of exposure encountered by members of the Pueblo. RAC worked closely with and had substantial input from San Ildefonso in developing Pueblo-specific scenarios with some unique activities and exposure factor values. Close interaction between RAC and San Ildefonso were essential for developing, testing, and finalizing the DAT and tribal risk assessment (TRA) tools and other work-related activities.

Significant findings from this work included the development of Pueblo-specific exposure activities, pathways, and exposure scenarios for the Pueblo members in the San Ildefonso setting. Each scenario activity takes place at specific geographic locations at San Ildefonso. RAC updated the risk assessment tool to incorporate improved options for viewing the results and wrote brief information summaries for key analytes, in response to a request from the TRA technician. RAC also developed user guides for the Data Analysis Tool and TRA tools, which included an interpretation guide for guiding the Pueblo in its long-term goals of interpreting and communicating health impacts to its members.

Risk-Based Screening for Releases to the Columbia River at Hanford

As part of the follow-up work to the Hanford Environmental Dose Reconstruction (HEDR) Study, the Centers for Disease Control and Prevention contracted with RAC to screen the radionuclides released to the Columbia River during operation of the Hanford Site from 1944-1972 on the basis of health risk. The purpose of the work was to check that the doses calculated in the HEDR Study for 24Na, 32P, 65Zn, 76As, and 239Np were the most important radionuclides released to the river, because a review for the Agency for Toxic Substance and Disease Registry suggested this was not the case and that doses from 131I, 60Co, and 90Sr should also be calculated.

RAC developed and applied a two-stage, risk-based screening methodology to identify the most important radionuclides and exposure pathways for releases to the Columbia River from the Hanford Site. This methodology was reviewed by the National Academy of Sciences. A key focus of this work was to investigate doses to Native Americans who use the Columbia River as a primary source of food (both now and historically). RAC used dietary information and habit data provided by Native American tribes in the region to accomplish this task.

The findings from this work confirmed that the HEDR Study calculated doses for the most important radionuclides, specifically 32P, 65Zn, 76As, and 239Np. Our analysis did not support the suggestion that doses from 131I and 90Sr needed to be calculated, but there was merit to the inclusion of 60Co as a secondary priority and also 95Zr and possibly 137Cs. Our findings were in agreement with the HEDR Study that fish ingestion was the dominant exposure pathway for releases to the Columbia River.

The Citizen’s Advisory Board at Rocky Flats selected RAC to derive soil action levels to be used as the basis for cleanup and decommissioning of the Rocky Flats Plant near Denver, Colorado. Over a period of 18 months in 1998 and 1999, RAC worked with the Radionuclide Soil Action Level Oversight Panel, which consisted of a mix of technical specialists and individuals with no technical experience drawn from public interest groups, local governments, and the general public. These panel members from a cross section of the community had considerable experience in Rocky Flats issues and were tasked with developing recommendations for soil cleanup.

Ultimately, these recommendations were used as the basis for cleanup at the site. Working with local citizens during the process helped the Department of Energy, the Environmental Protection Agency, and the Colorado Department of Public Health and Environment reach a unified approach to cleanup at the site, which has now been completed. The work was supported by the Rocky Flats Citizen’s Advisory Board.

RAC developed seven realistic scenarios, which served as guides to a range of possible profiles of people who may have been in the area. Working with the panel, RAC considered a number of key factors in the scientific calculation of the radionuclide soil action level (RSAL), including the impact of a fire on the area after cleanup, identifying the limiting scenario, and longevity of institutional controls.

The significant findings from this work included setting the RSAL for plutonium at 10 pCi/gram (370 Bq/kg) and for uranium at 20 pCi/gram (740 Bq/kg). RAC calculated the time of maximum dose for decision making purposes as 2000, the year following the RSAL calculations. The cost of cleanup and the impact of the actual cleanup phase on local residents were not taken into account. This was a public study and the oversight panel’s role was critical and unique in setting a technically-based soil action level.