Helen Grogan recently served as one of the U.S. delegates to the 65th session of the United Nations Scientific Committee on the Effects of Atomic Radiation (UNSCEAR) in Vienna, Austria, from June 11-14, 2018. This is Helen’s fifth year serving on UNSCEAR. The 2018 UNSCEAR delegates for the U.S. pictured above (L to R) are Bruce Napier, Helen Grogan, Vincent Holahan, Wesley Bolch, Gayle Woloschak, David Pawel, Armin Ansari.

United Nations Information Service June 14, 2018, press release:
“Over 150 scientists from 27 State Members of the Committee, four observer countries and nine observer organizations advanced the work of its scientific reports on selected evaluations of health effects and of risk inference due to radiation exposure, on lung cancer from exposure to radon, and on biological mechanisms influencing health effects from low-dose radiation exposure. The Committee also discussed its scientific evaluation of levels and trends of exposures of patients and workers to ionizing radiation. The UNSCEAR secretariat is currently running two global surveys on medical and occupational exposure. These surveys are being conducted in cooperation with the International Atomic Energy Agency, the International Labour Organization and the World Health Organization.

The Committee has agreed to begin its work in updating the UNSCEAR 2013 Report on the levels and effects of radiation exposure due to the nuclear accident following the Great East Japan earthquake and tsunami. The Chair of UNSCEAR, Hans Vanmarcke, said: “The Committee wants to finalize its assessment before the 10th anniversary of the accident in 2021 as this would be very important for the people in Japan and the whole world.”

The Committee also agreed to establish an adhoc working group to develop its future programme of work on the effects of radiation exposure. 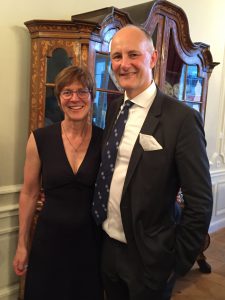 Helen Grogan and Malcolm Crick, Secretary of UNSCEAR, at reception hosted by the Belgian Ambassador

Helen Grogan recently served as one of the U.S. delegates to the 64th session of the United Nations Scientific Committee on the Effects of Atomic Radiation (UNSCEAR) in Vienna, Austria, from May 29 to June 2, 2017. This is Helen’s fourth year serving on UNSCEAR. The 2017 UNSCEAR delegates for the U.S. pictured above (L to R) are Naomi Harley, Gayle Woloschak, Bruce Napier, Wesley Bolch, Vince Holahan, Helen Grogan, David Pawel, and Armin Ansari.

During a reception hosted by Belgian Ambassador, UNSCEAR secretary Malcolm Crick announced his retirement, to be effective November 2017.

RAC is pleased to announce that Dr. Colby Mangini joined the RAC team in May 2017. Colby is a Certified Health Physicist (CHP) with a diverse background in applied health physics and computational health physics. He began his career in the U.S. Navy, where he taught at the Navy’s Nuclear Power School (NPS), and completed his Masters in Health Physics at Oregon State University (OSU). After the Navy, Colby earned his Ph.D. in Radiation Health Physics at OSU, where he was also an instructor. Since completing his Ph.D. in 2012, he has held positions as a principal scientist at Knolls Atomic Power Laboratory and as Radiation Safety Officer at St. Jude Children’s Research Hospital.

Colby will assist the RAC team in radioactive contaminant transport modeling, dose reconstruction, and other areas of environmental risk assessment. He has already provided valuable support on several projects, including helping to present RAC’s most recent training course for the Nuclear Regulatory Commission (NRC) and performing QA/QC review of computer code used for calculating radiation dose.

RAC presented a 5-day training course on environmental risk assessment for the Nuclear Regulatory Commission (NRC) from May 8 through 12, 2017, at the NRC Professional Development Center in Rockville, MD. John Till, Helen Grogan, Pete Shanahan, Art Rood, Emily Caffrey, and Colby Mangini presented lectures and case studies during the week. The course was designed to allow participants to use their acquired knowledge to complete performance evaluations of licensee environmental assessments, perform environmental impact reviews, inspect licensee programs, and manage environmental projects. RAC has presented a similar training course for the NRC twice previously and is contracted to present up to two more courses for the NRC through 2019.

Helen Grogan served as one of the eleven U.S. delegates at the 63rd session of the United Nations Scientific Committee on the Effects of Atomic Radiation (UNSCEAR) in Vienna, Austria, from June 27 through July 1, 2016. This is Helen’s third year serving on UNSCEAR. The 2016 UNSCEAR delegates for the U.S. (shown above, L to R) are John Boice, Vince Holahan, Lynn Anspaugh, Bruce Napier, Helen Grogan, Julian Preston, Gayle Woloschak, Wesley Bolch, David Pawel, Armin Ansari, and Naomi Harley. 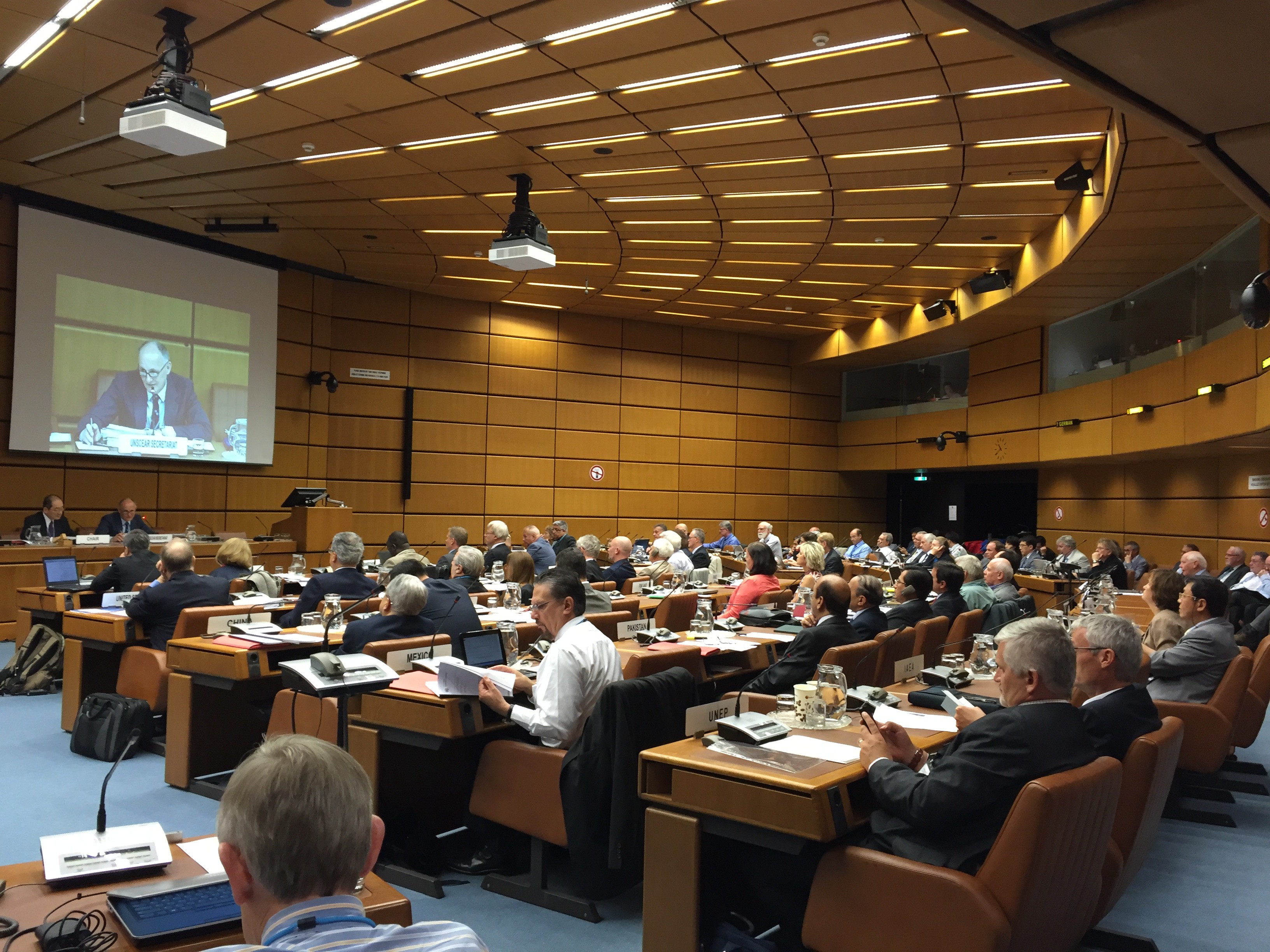 Emily Caffrey was presented with her doctoral degree at the Oregon State University commencement ceremony on June 11, 2016. Emily received her Ph.D. in Radiation Health Physics with a minor in Statistics. Her research included environmental dose assessment and computational dosimetry methods.

The RAC team traveled to Salt Lake City, Utah, during the week of February 22, 2016, for several days of meetings. We were pleased to welcome Emily Caffrey, our newest team member, to her first RAC team meeting. This week provided an opportunity for team discussions regarding technical issues, progress, and path forward on all ongoing projects. In addition, the team met with several clients to provide updates on projects. 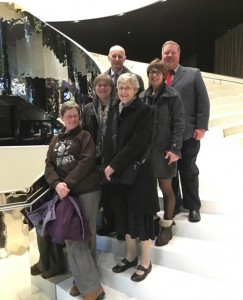 Helen Grogan was in Vienna, Austria, February 15 through 19, 2016, helping with the preparation of an UNSCEAR (United Nations Scientific Committee on the Effects of Atomic Radiation) report that addresses radiation exposures from electricity generation.

The report committee is pictured above (from left to right):

Art Rood gave an invited presentation on exposure pathways from Technically Enhanced Naturally Occurring Radioactive Material (TENORM) at an NCRP workshop on TENORM in unconventional oil and gas production.  The workshop was held February 1-2, 2016, at the 49th Midyear Meeting of the Health Physics Society in Austin, Texas.

John Till selected as member of NCRP Scientific Committee 1-25

John Till was selected to be a member of the newly formed NCRP Scientific Committee 1-25. The committee is charged with preparing an NCRP Commentary on “Recent Epidemiologic Studies and Implications for the LNT Model”. The work is supported by the US NRC. The committee will look at recent literature related to low dose exposures to determine the continued appropriateness of the LNT model for radiation protection. John will be assisted by RAC team members Helen Grogan and Harold Beck in evaluating the dosimetry used in the epidemiologic studies being evaluated.

Members of NCRP SC 1-25 shown above include (left to right, beginning with top row):